The name of this Organization is the Wisconsin Kitty Cat Racers, Inc. and is referred to as WKCR.

WKCR was started in 1990 by interested families who wanted to have kids race Kitty Cat snowmobiles.

WKCR is a non-profit organization that has competitive oval ice and grass races for children ages 4 to 15. These races are intended to be fun family orientated events. Good sportsmanship and family involvement are encouraged. Racers make friends, practice their racing skills, and learn to strive to achieve goals through friendly and safe competition.

WKCR is an all-volunteer organization and race families are expected to participate in putting on the race day event and other needs of the organization.

WKCR is organized exclusively for charitable, religious, educational, and scientific purposes, including, for such purposes, the making of distributions to organizations that qualify as exempt organizations under section 501(c)(3) of the Internal Revenue Code, or corresponding sections of any future Federal Tax Code.

The WKCR membership and interested racers will meet at least twice annually.

The Annual Meeting will take place at the end of the year Banquet and awards ceremony, in spring. This meeting involves electing officers, share ideas, discuss rules, and talk about the upcoming race year.

Other meetings will be held at the summer picnic and various races to discuss the upcoming race schedule, rule clarifications, and other needs of the organization.

Race Rules are published in the yearly WKCR Program. The rules section within the program includes details on racer age and experience requirements, different classes, how races are to be run, safety requirements, registration fees, and more.

ARTICLE VII : Board of Directors

Officers shall be the President, Vice-President, Treasurer, and Secretary.

The four officers shall make up a Board of Directors for WKCR to run the organization and shall be responsible for the day to day operations of the organization. The officers should seek the opinion of the membership whenever feasible and practical. The Board may change rules or establish emergency rules as needed. Changing rules during the season should be avoided, when possible, other than for emergency rules affecting safety.

The President may invite Appointed Positions and members to Board of Directors meeting and seek input from those invited and any topic.

RACE DIRECTOR: The race director is responsible for track setup and race day events as listed in the Annual ISR Book.

TECH DIRECTOR: The Tech Director determines a fair level and extent of technical inspection for each sled at each race. The Head tech will conduct or lead any technical
inspections and recommend decisions regarding further education or disqualification when a racers sled does not meet established ISR or WKCR Rules. The Head Tech will notify the President (or Vice-President in the President's absence) prior to any disqualification of any race participant. The Head Tech , along with the Race Director, shall have the authority to determine structural integrity of the snowmobile. The Head Tech shall carry, and be responsible for, the official specifications and certain instruments for measurements concerning verification and control of contestant's snowmobile. The decisions of the Head Tech may be reviewed by the Board of Directors and appealed, per the WKCR Rules, to the Board of Directors. The Head Tech will select the snowmobiles for mandatory teardown and inspection.

PR DIRECTOR: PR Director will work to advertise and promote each Race in the local communities in which the organization races within. This may entail press releases, put up signs at local business, and other similar promotions of an upcoming race. PR Director is responsible for putting up race day banners and safety signs as directed by ISR and Insurance company mandates.

OTHER APPOINTED POSITIONS: Other appointed positions may be appointed to fill the need of running the organization by the President. Examples of the positions are Webmaster, Banquet Committee, Fund Raising Committee, and others.

An annual membership fee will be required for racers wanting to race for year end points. Those Racers in the membership will receive a discount on race registration fees.

The organization may not dissolve and join any organization without the approval of 85% of all paid members from the last race season.

Should the organization dissolve for any reason, assets shall be distributed for one or more exempt purposes within the meaning of section 501(c)(3) of the Internal Revenue Code, or corresponding sections of any future Federal Tax Code, or be distributed to the State of Wisconsin, for the public good.

ARTICLE XIIII: Amendments to these Bylaws

These bylaws may only be amended by a majority vote of the Board of Directors once first announced to the membership at the Annual Meeting that said Bylaws are to be review and possibly amended. 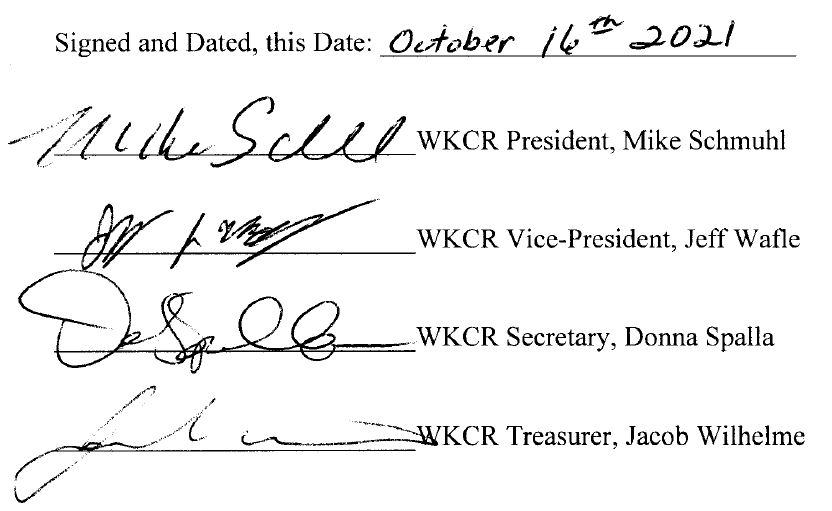 Pella Windows and Doors of WI